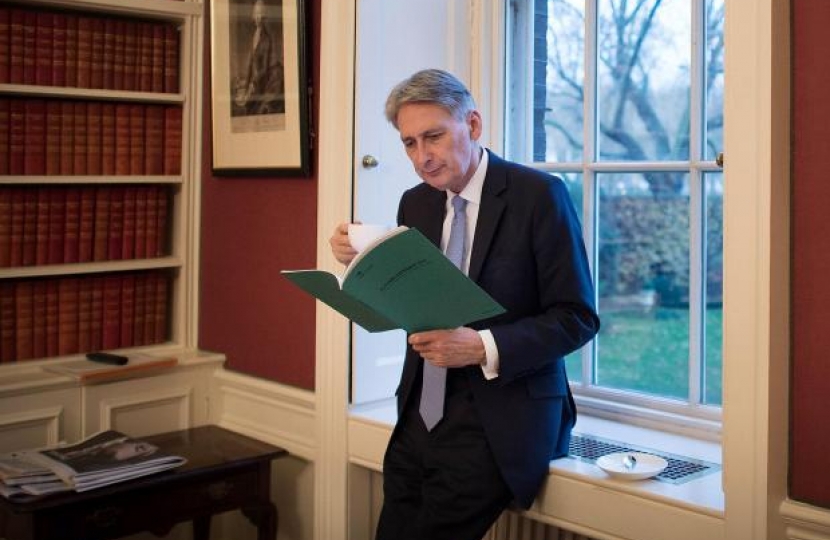 The Office for Budget Responsibility has forecast growth to slow and inflation to rise over the next two years.

However, the UK economy is forecast to be the fastest growing major economy in 2016. Growth remains positive and employment will continue to rise in each of the next 5 years, with 500,000 more people expected to be in work by 2021.

Since 2010 borrowing has fallen by two-thirds. The Government has decided to abandon its aim for a budget surplus by 2019 and instead will set new fiscal targets which aim for a balanced budget soon after 2020.

Constituents will be pleased to read the Government is investing more in bringing fibre availability to every corner of the country.

This area has been of particular concern to many of you, and though improvements are being seen in most areas of the constituency there are still constituents unable to access a fibre service.

I hope that with this announcement support given to the private sector with the fibre broadband roll out will bring improvements to the service currently available in Finchley & Golders Green.

The Government will also provide funding to support trials of 5G mobile communications.

A seventh consecutive freeze on Fuel Duty was announced which will save motorists, on average, £130 a year.

In line with the Government’s commitment to support those who strive, and those ‘just about managing’ (JAMs), a new investment bond will be available from Spring 2017 that will offer savers an indicative rate of 2.2%.

The bond will be flexible, allowing customers to put away between £100 and £3,000. It will be available to those 16 and over.

That means over £1,400 a year more for a full-time worker previously on the National Minimum Wage.

The Chancellor announced that letting agents will no longer be able to charge renters fees, such as signing a tenancy agreement.

This is expected to save tenants from having to pay an average of £223 in fees when signing a tenancy agreement.

£2.3 Billion for a new Housing Fund

This fund will be used to deliver and support the construction of up to 100,000 new homes in priority areas.

On top of this, £1.4 billion will be used to provide 40,000 new affordable homes, including for shared ownership and affordable rent.

Another £1.7 billion will be set aside to accelerate construction of new homes on public sector land.

£390 million will be invested in bringing innovative technology to improve the UK’s transport infrastructure, including driverless cars, renewable fuels and energy efficient transport.

As part of the Chancellor’s ambitions for improving UK productivity he announced several projects that will form part of the National Productivity Investment Fund:

There will also be a two-year 100% first year allowance for companies who install electric charge-points, launched on Wednesday 23rd November‎.

This allows companies to deduct the cost of the charge-point from their pre-tax profits in that year‎.

And £450 million will also be spent on trialling railway digital signalling technology which will expand capacity and improve reliability.

The Government has shown Britain is open for business by making a commitment to provide the most competitive Corporation Tax rate of any G20 country. The new rate is expected to support over 1 million businesses, which in turn will lead to an expansion in recruitment.