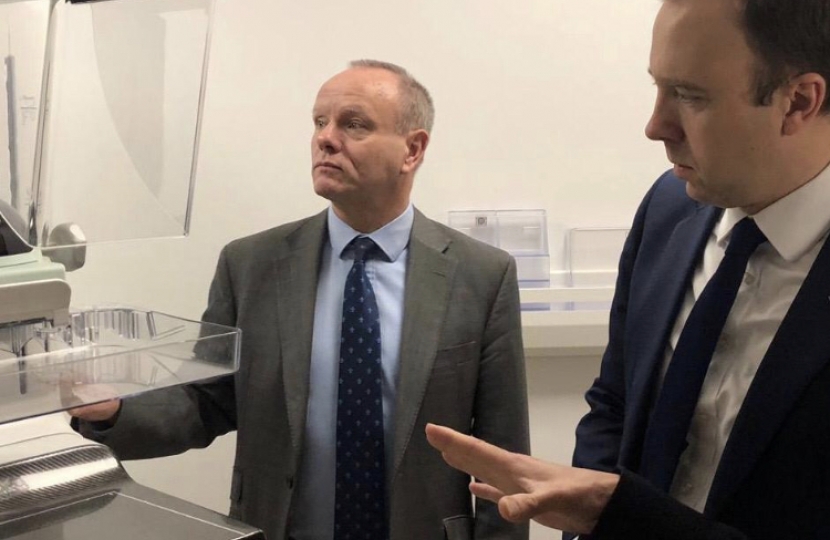 Local MP, Mike Freer, accompanied the Secretary of State for Health, Rt Hon Matt Hancock MP, to the official opening of the new permanent digital breast screening unit at Finchley Memorial Hospital on 17 January 2019. This was the culmination of 9 years of campaigning by Mike, first as Leader of the Council and then as the local MP.

Commenting after the opening, Mike said, “I am very pleased to see this important new unit opened after my long-running campaign. Early detection of cancer can help the chances of successful treatment drastically and this new permanent unit will help improve the lives of women in our area for years to come.”

Mike first realised in 2010, whilst looking at his newly created portfolio for public health, that the local take up rate for breast screening was well below national targets.  The reasons included that the call up process was ineffective, especially for non-responders, but also that the machines used were analogue and breast screening films were sometimes lost, mislabelled or misread.  The breast screening service was eventually suspended and overhauled.  The machines were then all replaced with digital machines and Mike noticed that the permanent screening centre at Edgware General Hospital was more welcoming than the mobile unit that serviced Finchley Memorial Hospital.  This led to a campaign for a new permanent centre at Finchley Memorial and Mike now plans to write to every household in his constituency telling his constituents about the new service.