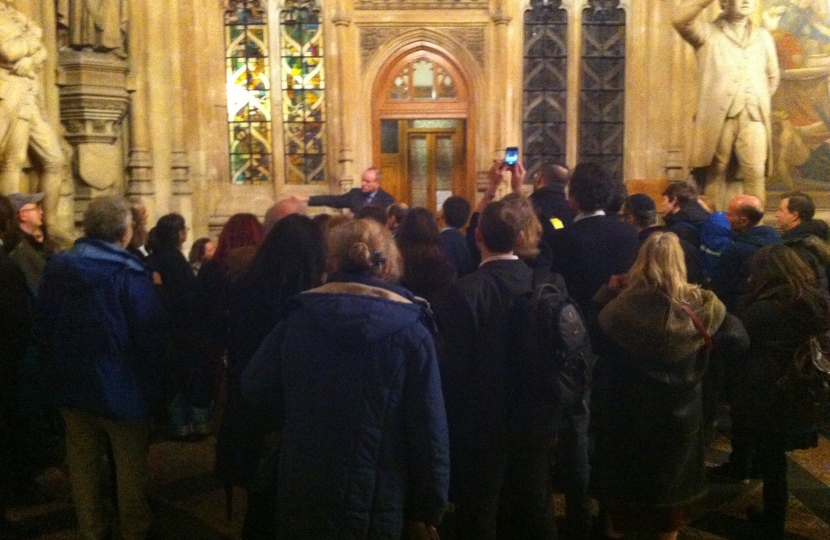 I started my week with paying respects at Finchley Reform Synagogue to those who lost their lives during the Holocaust during the Second World War.

I attended a number of meetings relevant to my role as PPS to the Leader of the House of Commons. The Leader of the Commons is responsible for the smooth passage of legislation and my role is to act as a contact for backbench concern. I also did a brief stint of ‘bench duty’, a term used for when a PPS is required to support a Minister in the House of Commons Chamber.

This week was the first ‘Evening in Westminster’ event of 2016, a very popular event where I invite residents in the constituency to the Houses of Parliament for a few drinks and nibbles and a tour of the Parliamentary Estate. I started this initiative in 2010. If you have not yet had an invite don’t worry, I am making my way round the entire constituency – which, as I am sure you can imagine, will take some time.

Thursday afternoon I had a busy afternoon in meetings. I met with representatives from René Cassin a charity which promotes the Jewish Voice and standing up for Human Rights. I was also very pleased to meet with residents living on the Strawberry Vale Estate to discuss the issues currently being faced there. I agreed I would visit the estate see first-hand how the current situation is impacting them. It was also a pleasure to see the aspirational plans a number of residents in the constituency have in forming a committee with the view of setting up a new secondary school in NW11.

At the end of the week I held one of my regular surgeries, giving constituents an opportunity to raise any issues with me face-to-face.

I had a fantastic evening on Saturday at a gala concert in aid of the Jewish Community of Lvov. A town infamous for both German and Soviet persecution of the Jewish community during the Second World War. Lvov, called Lviv in Ukrainian, is now a part of the Ukraine and has an approximate Jewish population of 5,000. Unfortunately, there is still a strong undercurrent of anti-Semitism there and most of the population are relatively poor.

The recent conflict between Russia and the Ukraine has made the situation worse; 2.5 million people have fled their homes and the weak Ukrainian economy means there are minimal resources available to address the humanitarian crisis in the country. The funds raised at the gala concert will be managed by World Jewish Relief to support those communities in Lviv most in need.