A privilege to be re-elected 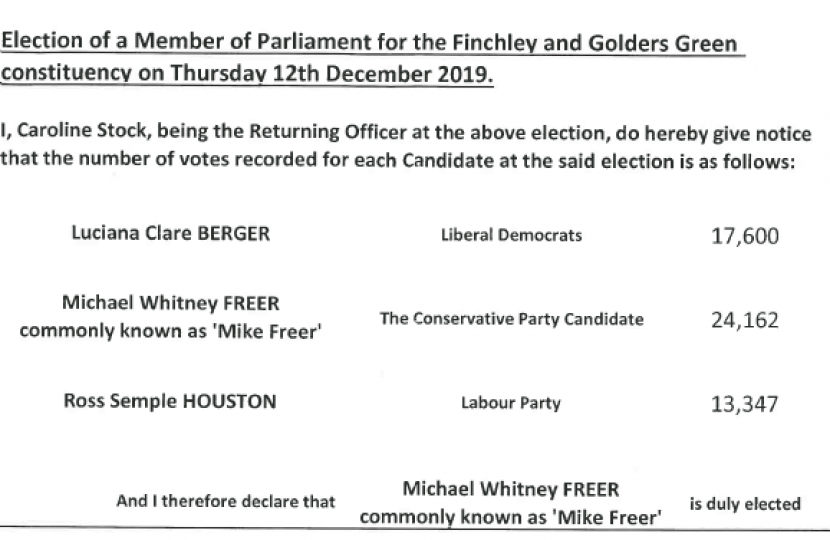 I am delighted to have been re-elected as Member of Parliament for Finchley and Golders Green with a majority of 6,562. I wanted to pay a huge thank you for the support shown in me in the General Election.

Now that the election is over, and we have returned to Parliament, I wanted to a say a number of things. It has always been an honour to represent Finchley and Golders Green in Parliament, and to be returned with a much-increased majority is a fantastic show of faith in me from the local community – and for that, I thank you.

I remain committed to being a hardworking, accessible and no-nonsense MP that get things done. I have a record of having a high response rate to constituents who raised enquiries with me and my office. I remain committed to continuing this, and you can see details of surgeries on my website. I will also, as ever, be around the constituency in my mobile surgery bus and at my ‘supermarket surgeries’ – details of these will go on my website when they are arranged.

I want to reiterate several of the promises I made throughout the election campaign. The safety and security of residents is the priority of any government, and I will continue to fight to make sure we allocated our fair share of police officers. Currently, we get one of the lowest amount police officers per head of any London Borough, and I will be continuing to campaign and press the Mayor of London that Barnet is awarded its fair share. The Government has pledged to recruit 20,000 new police officers over the next three years, with recruitment already underway on 1,369 new officers for the Metropolitan Police.

I am also aware of the need to provide sustainable, affordable new homes in the local area, and I will work with residents to deliver such homes. There is a need, however, to ensure that this local housing is in-keeping with our local area. Therefore, I have consistently been opposed to the plans for the development at Finchley Central station. My objection is not to the project as a whole, as I do recognise the need for new housing, but the sheer scale of the project. A 28-storey tower block is vastly out of keeping with the local area, and I will continue to press Transport for London to provide more reasonable plans that deliver both much needed housing that remains in keeping with existing structures.

I have always championed our NHS, and I will continue to campaign throughout this term in Parliament for better GP services, better cancer detection and better links between the NHS and social care both locally and nationally. This can then ensure that we can all get the healthcare we need, when we need it.

More widely, this election has certainly ended the uncertainty that has clouded over parliament in the last two years. With the largest Conservative majority since 1983, the Prime Minister and his government can take decisive action and deliver on the priorities of the country. We remain committed to hiring extra police officers, hiring more nurses and giving the NHS the increased funding it needs, while ensuring that our schools are properly funded so that every child has the chance of an outstanding education, and I look forward to ensuring this government achieves those things and more.