The Times: The anti-Semitism debate is not about partisanship — it’s about freedom 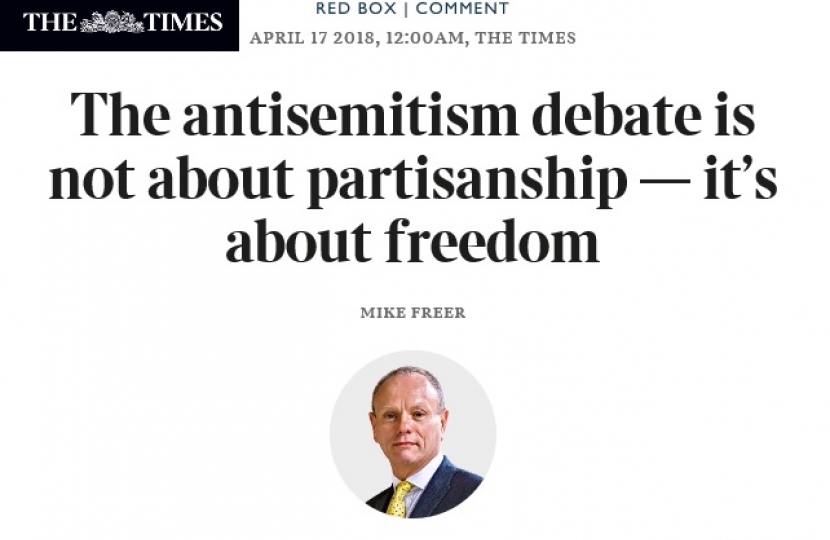 The House of Commons will today host a general debate on an issue that, having been virtually eradicated from British public life many decades ago, has once again reared its ugly head: antisemitism. That this debate needs to be had at all is utterly lamentable.

Following Jeremy Corbyn’s election as the leader of the Labour party, antisemitism has been driven to the top of the political agenda by two years of incidents within Labour’s ranks, ranging from the ill-judged to the decidedly racist.

As the MP privileged to represent the largest number of Jewish voters in the country, I know that the anger and frustration amongst the community is palpable and cannot go unanswered.

Three weeks ago, I joined dozens of Labour and Conservative MPs in Parliament Square along with 1500 members of the Jewish Community to deliver the message that enough is enough. Several Labour MPs spoke forcefully about the need to stamp out antisemitism within their party and their bravery cannot be understated.

They risk the wrath of local Labour parties, some of which have sought to pass motions condemning their MPs for even attending the rally, while others have vehemently dismissed it at as an attack on the party leadership.

My concern, however, is that these MPs have little power to enact the changes that are so desperately needed. The question for these moderates, surely, is how much more they will tolerate. How many more blatantly antagonistic actions from within their own party must they stand before they say enough is enough and deny Jeremy Corbyn and Labour their support in parliament?

Mere days after that same rally, Mr Corbyn chose to spend a Passover dinner with Jewdas, a fringe group who not only espouse the sort of far-left vitriol that has become common currency in the Labour party, but who expressly lambast mainstream Jewish communal organisations.

After the plea from those same bodies for Mr Corbyn to engage and assuage their fears, it is difficult not to see this as a calculated slight.

It is actions such as this, and through a recent interview with the Jewish News — where Mr Corbyn refused to condemn Jewish Voice for Labour, the organisers of the bewildering counter-rally against those protesting antisemitism last month — that he has made his real views abundantly clear.

The current party leadership cannot be trusted to address this issue properly. After Labour’s last review into the problem in 2016, the Chakrabarti Inquiry, skirted over many of the concerns raised by Jewish members of the party and its author was summarily awarded a peerage, a properly independent inquiry is now badly needed.

So, as parliamentary colleagues on both sides of the House stand up today to speak, the exasperation of many of my constituents and the Jewish community more broadly cannot be understated.

But the debate should not be about partisanship; it should be about calling out hatred in a mainstream political party and ensuring that an entire community feels they can engage freely in the political process without fear of persecution. A freedom which has been severely undermined.

Today, Jeremy Corbyn has the opportunity to draw a line in the sand and lay out decisive action to eradicate antisemitism from his party. He should take it.

Mike Freer is the Conservative MP for Finchley and Golders Green