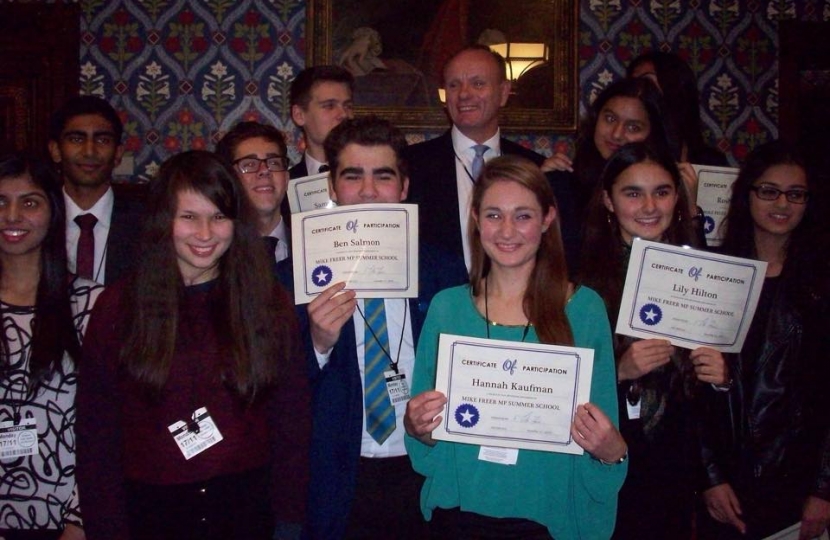 On Monday Morning, I headed to Hammerson House Care Home to meet residents and hold a question and answer session. I spoke to residents on a range of topics before heading over to Brent Cross for a catch up meeting on the regeneration scheme.

That afternoon, I was scheduled to be in Westminster where I met with constituents. On Monday evening, I had the pleasure of presenting students who attended my Summer School work experience academy with certificates for all their hard work. It was great to meet with the students again and I wish them all the best.

As was the case last week, I had several sessions on the Bill Committee for the Taxation of Pensions Bill. I take a keen interest in pensions and enjoyed scrutinising the Bill to enable people to take more money from their pensions, with a lesser tax burden.

I had another interesting meeting on Wednesday morning with Crossrail to discuss their plans for Crossrail 2. I later welcomed Simon Davies from Jewish Care to Parliament. I met him previously to present a letter from the Prime Minister for his fundraising efforts.

Thursday saw further sessions on the Taxation of Pensions. Later that day I hosted the launch of Jewish News’ Interfaith Channel. This is the first inter-faith channel of its kind hosted by single-faith media. It aims to “highlight the work of organisations and initiatives bringing members of different faiths together to break down barriers”. Further information can be found on the Jewish News website.

Friday morning began with a trip to Christ’s College where I held a question and answer session with politics students before having a meeting with their headteacher. When I returned to my Finchley Office, I held a number of surgery appointments for constituents.

I had a series of engagements over the weekend, not least opening the brilliant new Margaret Thatcher Memorial Garden at the North London Hospice. I also enjoyed visiting the Jewish Family Centre and the Torah Vodaas Primary School Gala Dinner.