Article 50: Trigger or not? 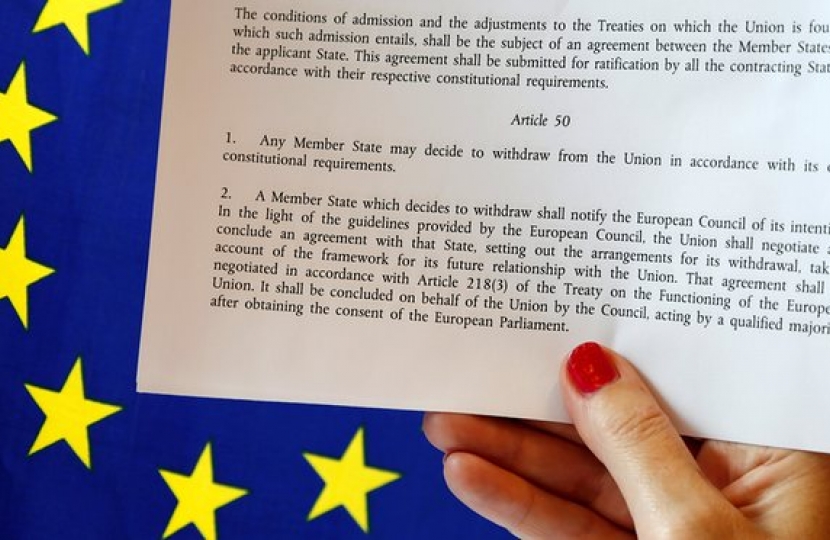 We live in a representative democracy but few voters and I suspect a few MPs, do not grasp the full ramifications. Crudely MPs are not delegates, we are not simply sent to Parliament to vote the way our constituents want. Given that 100% of the electorate never turns out, how would we represent those that didn't vote? How would we represent those that voted for a different outcome. Given that election manifestos are rarely a detailed five year plan, how would I know what my constituents think about every clause, sub clause and amendment or indeed a new bill that had to deal with an issue not explicitly covered in the manifesto. MPs have to take account of their constituents views, as known, and represent those views but that is not the same as mandating MPs to vote any particular way.

We now have the prospect of MPs having to vote on whether to trigger Article 50. I was a remainer. I campaigned to remain. I voted to remain and now I am receiving emails telling me I must vote to stop Article 50. Why my constituents voted overwhelmingly to remain and I must represent them. I am not inclined to do so.

If the referendum result had been for remain and the House of Commons had a majority of leave supporting MPs and they voted to leave anyway, remainers would be furious. Rightly so. The leaflet sent by HM Government about the referendum clearly stated that the decision would be the people's to make and that the result would be honoured and implemented by the Government. I understand and cherish my role as a constituency MP but I cherish more my duty to protect our Parliamentary democracy and its institutions. Every day I feel the history and the sacrifices made by those MPs and campaigners that have gone before. To do anything that could cause our democracy to unravel is an anathema.

Every MP spends hours, days and weeks of their lives on the doorstep. We've all heard far too often that there's no point in voting because nothing changes and MPs are all out of touch. What better way to prove the point than to say the referendum was pointless and that the 17.2m people who voted to leave the EU will have their vote cast aside. The disillusioned, disenfranchised, and marginalised are fertile ground for those seeking to capitalize on an anti-elite movement. If the Westminster elite—the Westminster ‘bubblers’—turn their backs on 17.2 million voters, the loss of confidence in our Parliament and democracy will be palpable. If the election of Donald Trump tells us anything, it is that a political elite—largely metropolitan—who ignore the population, will face a backlash from the people if they feel they are ignored and not listened too. I'm not prepared to take that risk. If you want to fuel the far right and far left, if you want to sow the seeds of anarchy, ignore the largest popular plebiscite of our lifetime.

I won't obstruct triggering Article 50. I will challenge my Government to get the best deal possible, I will be a constructive critic but I won't ignore the votes and the voices of the people who have spoken clearly.