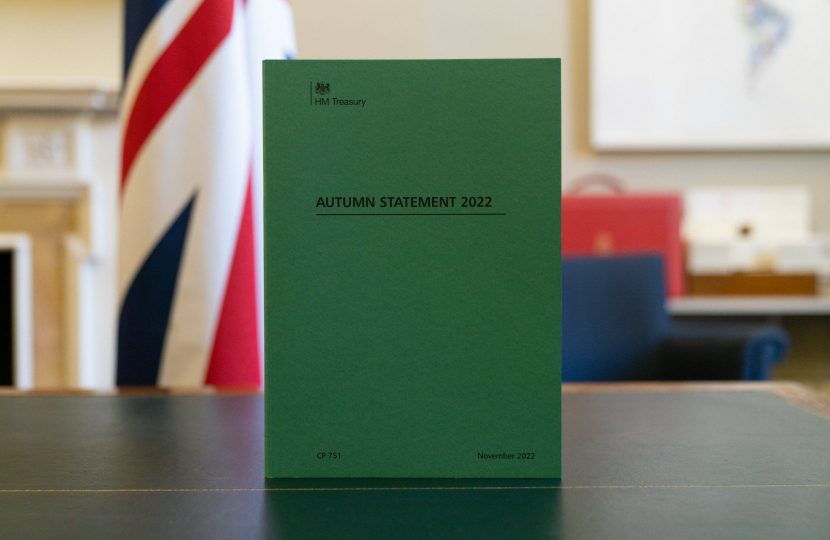 Yesterday, the Chancellor announced the 2022 Autumn Statement. Like many countries globally, the UK is facing economic challenges. The Covid pandemic and Putin’s invasion of Ukraine have cost billions. The Government rightly spent over £400 billion supporting jobs during the pandemic – but this must be paid back now rather than leaving it to future generations.

The Chancellor has been extremely honest that tough but fair decisions have had to be made to restore stability in our economy and to tackle inflation.

I am pleased to see more money announced for schools and the NHS, as well as a plan to boost economic growth. To achieve growth, inflation must be brought down, and debt must fall as a share of GDP. It is also extremely welcome to see benefits uprating in line with inflation and keeping the pensions triple lock.

Some of the key announcements made include:

The tax rises set out in the Autumn Statement raise £25 billion in additional taxes – these taxes are targeted towards businesses, wealthier households and the oil and gas industry. This ensures that we keep to our manifesto commitment to not increase Income Tax, National Insurance or VAT:

Low-income households will be protected:

As ever, there are more announcements that I haven’t been able to mention above. You can see further information on the below links:

The Government has this week announced a new energy scheme for businesses, charities and the public sector, ahead of the current scheme ending in March.