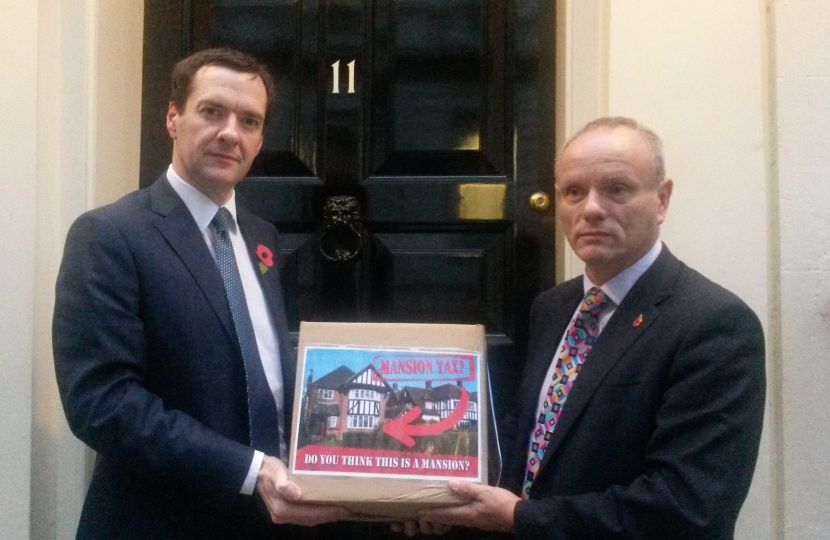 The Chancellor of the Exchequer, George Osborne, today gave his backing to Mike Freer MP’s campaign against Mansion Tax proposals. Over the course of the year, Mike Freer surveyed several thousand constituents on the matter and presented the results of the survey to the Chancellor at Downing Street.

George Osborne comments “I’d like to thank Mike for highlighting the concern of his constituents. Labour’s family homes tax would force many out of their homes. I can assure residents of Finchley and Golders Green that the Conservatives are completely opposed to this hugely unfair tax and that in Mike Freer, they have an MP who has fought tooth and nail against it”.

Mike Freer added “The Chancellor has made clear all along the Conservatives’ opposition to the so called Mansion Tax. The tax would be disastrous locally where the price of the average family home has risen sharply. Thousands of constituents stated they would have to move home or suffer financial hardship if the tax was introduced, which is why I shall continue to campaign vehemently against the proposals”

The Mansion Tax is a proposed levy on homes valued £2million and above. The average house price has risen sharply in Finchley and Golders Green meaning many residents would be liable for the additional annual tax bill. Mike Freer has long campaigned against the proposals put forward by Labour and the Liberal Democrats.

The surveys garnered a 35% response rate with 98% of respondents stating they were opposed to the Mansion Tax.