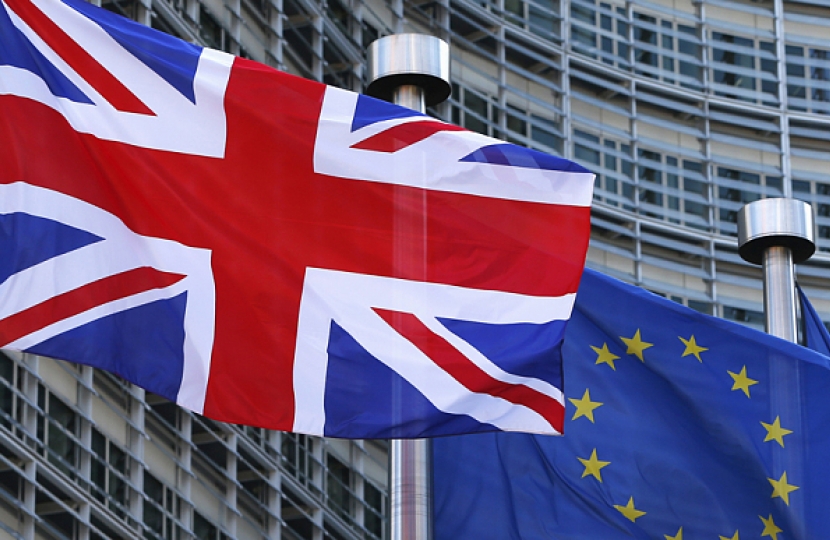 In a week’s time, you, the British people, will go to the polls and decide on the future of our country. As an MP, my vote is just one vote alongside yours. But as your Member of Parliament, I feel it is important you know my position. I suspect many of you, like me, have already voted via postal vote. For those of you who are still undecided and are yet to vote, I want to set out my case why I believe the UK’s future is within the EU.

Unlike many of my colleagues, I have not been overly vocal on this issue. For most of you that is probably a relief, having been subjected to a constant flow of claims and counterclaims from campaigners from both sides of the argument over the past few months. I’ll try not to do the same here and I’ll keep it straightforward.

When making a decision on the EU referendum ask yourselves two questions: Do we choose to turn our backs on our European neighbours and isolate ourselves? Or do we opt to remain part of a club where the United Kingdom can project its influence across – not only Europe – but around the world, by working with other countries on issues that can only be tackled most effectively through close co-operation?

Depending on who you talk to, the EU will elicit varied responses about which way they’ll be voting and why. If you are a farmer, you may think of the advantages you get from the Common Agricultural Policy. If you are a British fisherman or woman, you may base your decision on your opinion of how the Common Fisheries Policy affects your day-to-day working life. For me the biggest issue is the economic shock Brexit would deliver, especially in London. So many of my constituents work for firms that rely on the EU for a major share of their business. I simply do not believe the EU would give the UK a sweetheart trade deal overnight – if at all. Trade barriers and tariffs would destroy jobs in London. International firms based in London would scale back their UK operations, or simply relocate to Paris, Berlin or Frankfurt.

The UK has one of the most renowned financial services sectors in the world. Leave campaigners argue the UK’s economy could adapt and trade with countries outside the EU post-Brexit. The problem with this position is that it assumes companies like Nissan, Toyota, Honda, Tata Motors, and BMW-Mini will continue to base the bulk of their operations in the UK if we no longer remain part of the Single Market.

In part, these companies chose the UK as their European base because we offer a lower tax economy, including one of the lowest corporation tax rates of any of the major western economies, introduced by a Conservative Government – not Brussels. More importantly, however, is that the EU gives international companies direct access to the largest single market made up of 500 million consumers. If we decide to join the Single Market as a member of the European Economic Area (EEA) like Norway and Iceland post-Brexit – inside the Single Market but outside of the decision-making process – the UK would have no political influence over the decisions proposed but would still be required to pay a subscription fee. That would mean, regardless of whether we vote to leave on the 23rd June, some, if not all, of the UK’s weekly £350 million gross contribution – and the Leave campaigns central argument for leaving – would find its way back into the EU.

Our companies would still have to comply with EU regulations but would face tariffs and trade barriers and we could see companies relocate.  Yes, the European decision-making process is frustrating. At times decisions made will not always benefit us the same way they do other member states. But it seems senseless to me that we should choose to leave; that we should choose to give up our seat at the table and stand on the outside of the meeting room. Those who argue it's a price worth paying for our 'sovereignty' aren't likely to be the ones paying the price! Former Prime Minister, Winston Churchill, is often said to have been a Euro-sceptic. But during a debate in the House of Commons on the Schuman Plan, the precursor to the European Union, on 27 June 1950, Churchill said the following:

"The whole movement of the world is towards an interdependence of nations. We feel all around us the belief that it is our best hope. If independent, individual sovereignty is sacrosanct and inviolable, how is it that we are wedded to a world organisation?... How is it that we have undertaken this immense obligation for the defence of Western Europe...? It can only be justified and even tolerated because on either side of the Atlantic it is felt that interdependence is part of our faith and the means of our salvation."[1]

I will be voting to remain. Voting to continue to work for more reform in the belief that being a member of the EU – not a spectator – 'is our best hope' at securing you and your family's future. The United Kingdom should be leading Europe, not leaving it.