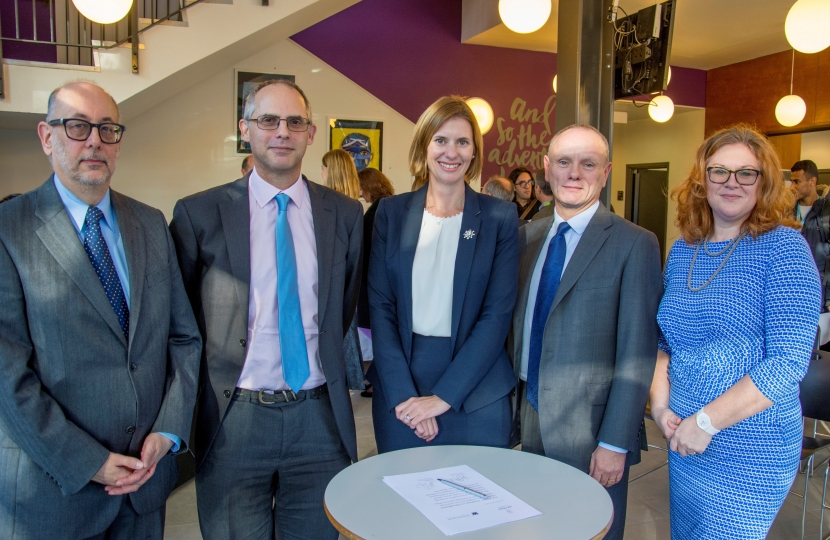 Later in the morning I attended the Archer Academy’s inauguration of its partnership launch with Woodhouse College. This new arrangement will see Archer students get preferential places for A levels, aid in development of career pathways for students and will encourage peer learning. You can read the following articles published in the local press for more info:

In the evening I met with Paul Maynard MP, the Parliamentary Under Secretary of State for Transport, to discuss the future of Britain’s rail infrastructure.

I rounded off Monday by meeting with NEPOMAK, here we talked over the priorities and needs of young British Cypriots. NEPOMAK is a global organisation for young (18-30) British Cypriots and has branches in many countries around the world, which aims to highlight the Cypriot communities’ contribution to society and their needs.

On Wednesday morning I attended a Jewish News event in Parliament. There were a number of key note speakers such as the Parliamentary Under Secretary of State for the Foreign and Commonwealth Office, Tobias Ellwood MP and the Home Secretary Amber Rudd MP. The discussions here mainly focused around the shared strategic challenges both the United Kingdom and Israel face.

In my role as Parliamentary Private Secretary (PPS) to the Secretary of State for Transport I met with a number of MPs in the early afternoon to discuss Vehicle Noise Limits.

In the evening I was honoured to give a speech at a Stop Aids - World Aids Day Conference. The main objective of the conference was to discuss the role of UK stakeholders in the past, present and future of the global HIV response and, in particular, the role that UK leadership can play in keeping the response on the right trajectory to realise the UNAIDS Fast Track targets and ultimately end AIDS as a public health threat by 2030.

On Thursday I met with local businesses to discuss a major local regeneration scheme that will provide jobs and housing for the local area.

On Friday morning I attended Childs Hill School to congratulate and present students with a certificate who won our annual Christmas card competition. I run this competition around Christmas time every year for all schools that wish to partake and ask their students design a Christmas card I then send out to my constituents.

On Sunday afternoon I attended a Fundraiser at Rueben’s House to celebrate their 50th anniversary celebrations. Rubens House, is a Care home run by Jewish Care for older members of our community and those who suffer from dementia.