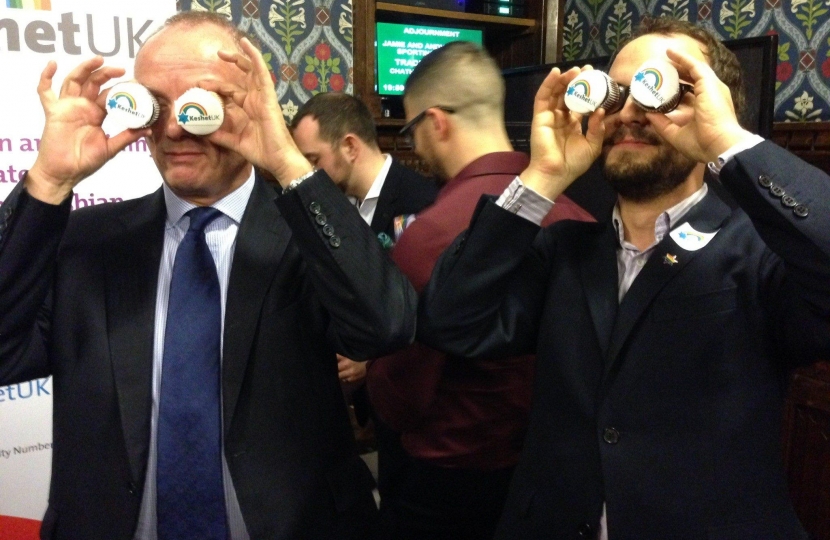 Later in the day I attended the Halve It World AIDS Day event. The purpose of which was to mark World AIDS Day, remember those living with HIV and commemorate those that have died from HIV/AIDS. Later in the event I had the honour of launching the ‘HIV Puzzle: Piecing together HIV care since the Health and Social Care Act’.

On Tuesday morning I started my day off in my role as Parliamentary Private Secretary to the Secretary of State of Transport, by meeting with London Conservative MPs to discuss the reasons for Southern, South West and South East trains remaining outside TfL control. I then met with colleagues to discuss the impact of the rail dispute on GTR/Southern routes.

My first event of Wednesday was to congratulate and present the winners of my annual Christmas card competition at Moss Hall Infant & Junior School with a certificates. I run this competition around Christmas time every year for all schools that wish to partake and ask their students to design a Christmas card which I then send out to my constituents.

In the evening I attended a Keshet event in Parliament which aimed to increase awareness of the role of LGBTQ individuals in all parts of the Jewish community. Keshet is a national organization that works for full LGBTQ equality and inclusion in Jewish life. Led and supported by LGBTQ Jews, Keshet cultivates the spirit and practice of inclusion in all parts of the Jewish community.

Thursday morning began with me congratulating and presenting the winners of my annual Christmas card competition at both Brooklands Junior School and Oak Lodge.

Later in the morning I met with the Chief Executive of the Association of Jewish Ex-Servicemen and Women (AJEX), to discuss how best to remember those who gave the ultimate sacrifice from the Jewish community for our country. AJEX has an amazing story to tell, that spans some eighty years and has a membership of over 4,000 individuals who served in the British Army, either during or after the Second World War. AJEX’s main aim is to remember the sacrifices of the past, provide help for those in need in the present and to educate for the future so past mistake will not be repeated.

On Friday morning I presented the runners up of my Christmas card competition at Wessex Gardens School with their prizes.

On Sunday evening I had the honour to attend a special programme celebrating the life and legacy of His Holiness Pramukh Swami Maharaj's and how he inspired the community in Finchley.