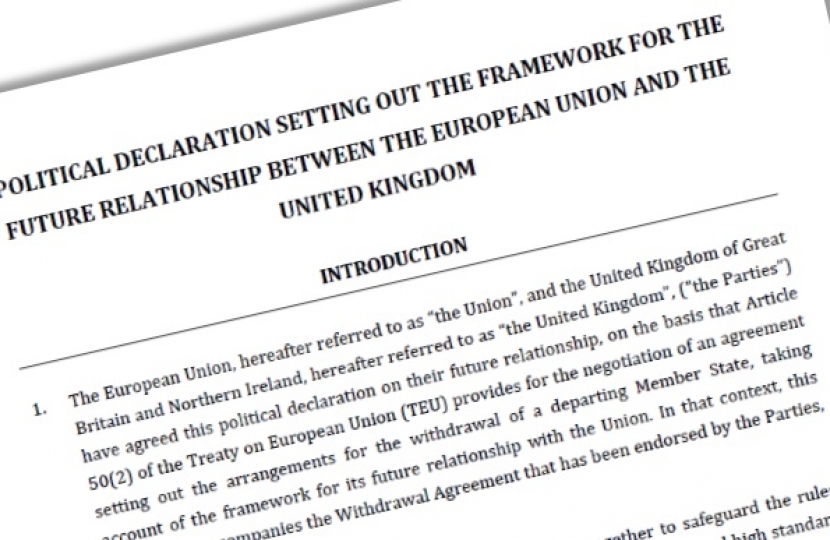 It will come as no surprise to anyone that the talk of Westminster at present is wall to wall Brexit – and specifically the draft Withdrawal Agreement set out by the Prime Minister last week.

Most the general public and MPs have accepted that the UK is leaving the EU and want to see progress made. I recognise that there remain strong feelings and views on both sides about Brexit generally, as well as some aspects of the draft document – and people aren’t afraid to share them with me! However, my view – which I have held since the referendum - is that we should rally around the Prime Minister and support her in getting the best deal possible.

Having attended a briefing for MPs and working my way through the 585 page document itself, I am convinced that the draft Withdrawal Agreement is a big step forward. It would deliver the outcome of the referendum – to leave the EU – and fulfil the manifesto pledge on which I was elected. It reaches a comprehensive agreement on the terms of the UK’s withdrawal and makes significant progress on the direction of our future relationship, including foundations of a practical and positive trade deal that works for both our country and our European neighbours.

Importantly, it deals with the outstanding issue of the Northern Ireland backstop – or insurance policy – that guarantees no hard border between Northern Ireland and Ireland if our future relationship is not settled by 2021.

I have said from the beginning that I would look carefully at any proposed withdrawal agreement and, eventually, a trade deal, and if I was not convinced, I would not support them. I am firmly of the view that this agreement is the best that we can negotiate. Some may still hold reservations but it is simply unrealistic to expect the EU to give us everything we want. Likewise, the EU is not getting everything it wants - but that is the nature of compromise.

Alongside the Withdrawal Agreement, the outline of the political declaration sets out the basis of an ambitious future partnership with the EU – a free trade area for goods, combining regulatory and customs co-operation with zero tariffs, no fees, charges or quantitative restrictions across all goods sectors. No other major advanced economy has such a relationship with the EU. This deal is good for London too - it reaches a common ground on services and investment, including financial services so important for the city’s economy; on cooperation on transport and energy; and on fisheries the provisions reflect the fact that the UK will become an independent coastal state once again.

Most people want two things – they want the Government to get on with Brexit (partly so they never have to hear about it again), and certainty that their jobs and the economy will be safeguarded and that we can continue to trade with the EU without too much disruption. The Prime Minister’s plan can deliver on both and that is why I support it.